"One of the most beautiful books ever written about Canada geese!"
Love Canada Geese

This delightful story about a child's love for a one-legged Canada Goose will touch you!

THE STORY OF BABY 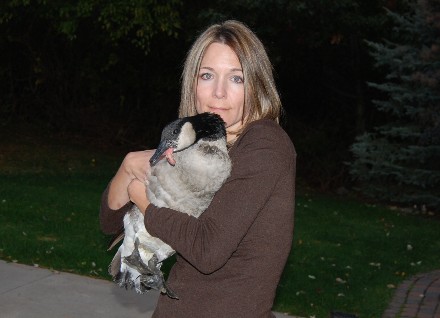 Baby is a Canada goose with a tremendous desire to survive and a very special need.  We were first contacted by Carrie who discovered Baby in early summer.  Here is Carrie's story:

"Early this summer I noticed a lone gosling and there seemed to be something not quite right about him. I tried to catch him and got close enough to see that part of his lower beak was missing. I was shaken, but at the time figured there wasn't anything I could do for him and that nature would run its course. For the next two weeks not a day went by that I did not think about that gosling, yet in a way I was grateful that his suffering seemed to have come to an end.

And then I saw him again! He looked weak and thin and he was trying to find something to eat. And that was when I realized that he had a great will to live!

I tried feeding him. I laid out a pile of duck pellets and watched from a distance with binoculars. Again and again he tried to pick up the pellets and my heart sank with every failed attempt. He was going to starve. I ran back home and got bread and piled little pieces onto the ground while he watched from a distance. I backed away and watched again through the binoculars. He returned and tried eating again and even though he had difficulties eating, he managed to eat a few pieces.

Since then I have been feeding him. He has gotten better at eating but is noticeably smaller than the other geese. A while ago he was gone and I figured he had migrated, but about two weeks ago he returned and I was thrilled to see him again.

I have watched this little goose fight to stay alive and he lights up my day when I go out to feed him in the mornings. I spot him waiting as I come through the park and he either runs up to me or sometimes flies towards me. We find a quite spot away from the other geese (or he becomes too nervous to eat) and he eats the pellets that I knead into little bread balls out of the palm of my hand. Just yesterday my husband and I were out canoeing and he swam up to us, but soon felt too crowded by some other geese and a swan and flew into our canoe and stayed with us for a while before hopping back into the water. He has made it so very far and I cannot bear the thought of what awaits him when it starts to freeze.

What shall I do ? Is there anyone out there who can help?"

Sometime in October 2008, Carrie and her family captured Baby and brought him to Carolina Waterfowl Rescue. Baby was seen by a vet.  He removed the bone that stuck out of the jaw and attached a band around the remaining jaw and the tongue to keep the tongue in place.  Baby is now able to feed himself. He even cleans his plate!

Baby is getting help with preening his feathers from Harrison, an imprinted goose. This allows Baby to keep his feathers waterproofed so that he can swim and be outside.

GOOD NEWS: BABY AND HARRISON HAVE FOUND A HOME AT A SANCTUARY.

Thank you very much!