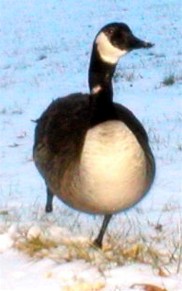 The True Tale of a Courageous Cape Cod Canada Goose 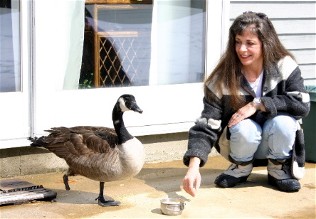 Marcia and Bandy reside in Cape Cod, Massachusetts. They've been friends since 1998, even though Bandy is a wild but non-migratory gander.

In 2003, Bandy lost his foot and consequently, his lifemate. Bandy has not found a new mate.

Marcia and Bandy bonded through her care of him and over the past two years, he displayed his bravery and some uncommon behaviour, breaking with his gaggle to show up at her door during the deep freezes of harsh winters.

Bandy almost lost his life when his leg was caught in a fishing line. In this photo, Marcia brings him home from the rehabber.

Bandy happily goes to the water

Marcia has been keeping us updated since we first introduced her at the end of August, 2005. Here is her story, in her own words:

I feel that the geese are my family. I have no other children besides my cats (and mice, and hamster). Bandy has always left at the end of July, as he did this year, but he's back! I think he plans to stay this year until the pond freezes, most likely in January. It is such a joy to drive in, then see Bandy come hobbling up the lawn. He listens for my car.

Last year he came alone on October 13th and stayed until January 25th - most of that time alone! He'd rather hang out with me than geese, though he does get lonely for them.

One still, frosty night around midnight I heard him honking soulfully. I ran to the pond in my slippers with a jacket over my PJ's. There he was in the middle of the pond, honking out a message I didn't understand. I was afraid he would disturb the neighbors.

I said to Jesse, "I think he's saying that he's going to leave me."

The next morning I woke up and made a bee-line for the pond to see if he was still there. To my surprise, several geese had joined him. I then realized that on the quietest moonlit night he was calling out to his friends to come from Ocean Edge (or wherever they were hanging out) and join him. I was happy that he had goose friends.

I previously had a bowl like this made for Bandy by some potter friends. One day, I put Bandy's special bowl down on our beach, filled to overflowing with corn and some water. That same day I brought my books over to the Sweetwater Forest Campground across the pond to sell there. On the front desk, I put a promo that read: "Takes place on this pond!"

During the day campers were out in their canoes and boats, coming kind of close to our beach. We left for two hours. When we returned, Bandy's special bowl had disappeared! I guess some camper saw the book and wanted to take a Bandy souvenir with them. I felt so sad, like you'd feel if someone stole your kid's bike, or your disabled kid's wheelchair or something! I immediately called up my friends and they made another one. This one will stay in the yard, close to the house, monitored!

Bandy's not eating out of it right now because he and all of the geese are temporarily away. I'm guessing he'll soon be back.

Pippi (far left, with dropping right wing), Lembeke, and Tommy (white marking on forehead that looks like a dusting of flour)

Last year, at this time, I took three orphans from Wild Care who came with the names Pippi, Tommy and Lembeke (named by Merieke Rosenbaum, an intern at Wild Care who was of Norwegian descent). I got them shortly after Bandy's departure. They were found beside their mother's body on the highway, with no father in sight! They were raised alongside a resin goose decoy, the only Mama they knew. Pippi was tiny and beautiful but had droopy wings, especially under stress. Lela (from Wild Care) didn't think it was angel wing but possibly a lack of development. I became so bonded to those three.

They spent much of their time looking in our sliding glass back door, pecking at the glass for me to come out and play with them. When they were across the pond, I'd stand on my beach and call out, in a sing-song fashion, "Pip-pi, Tom-my, Lem-be-eke," and they'd come flapping from the other side of the pond to my side.

One time a neighbor witnessed this and could hardly believe that they'd fly to me on cue. I loved those geese. When a few other geese came in early October last year, then left, my three orphans followed them. I was so worried about them, especially Pippi with her wing problem. That was the last time I ever saw them.

But the happy news is, the morning I discovered they were gone, Bandy returned a few hours later and filled the hole in my aching heart that my trio's absence left. That was last October 13th., after Bandy's two month absence. That was an amazing day!

Mono-filament fishing line sticking out from Lembeke's bill. He had swallowed it but Marcia was able to get most of it out.

On December 17th I had two booksignings in Orleans and Brewster. I arrived a few minutes late to the second one and two people were waiting for me. One was a woman who lives on my pond. I don't get to see her much because her primary residence is NYC. She took one of the photos in "Bandy" - the one of me hand-feeding Sprout. I have spoken to her and visited with her a few times when she was out in her boat on Griffith's pond. Well ... she had, in hand, a special gift for me. It was an 8"x10" photo of my beloved goose, taken last August at the cranberry bog on the other side of Griffith's Pond! Of course, I started crying when I saw it because I haven't seen Bandy since mid-September. The photo was framed and had a big red bow on it. I immediately set it up on my table for the signing.

Here is the photo that Jane Ditzel Stamm took: 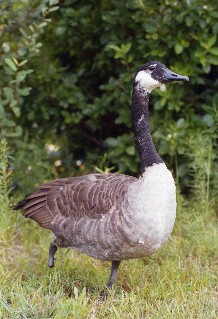 Isn't he beautiful? He holds his head high despite his handicap and his
inability to groom his right side. 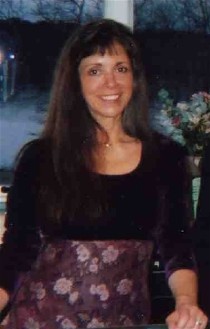 This photo of me was taken on February 11th, the day of my mother-in-law's memorial service. Her passing affects many things in our lives, including our place of residence. We are not sure when it will happen, but short of a miracle, we will be moving from our beautiful homestead on Griffiths Pond. Though we regret that we will be leaving Bandy and his friends, we are adjusted to the fact of this impending move and believe that it will work for good.

My mind hearkens back to Mark Bittner's story of the bond he developed with the wild parrots on Telegraph Hill, a beautiful and moving story. He lived on the verge of his circumstances escorting him away from his avian friends who had not only impacted his life, but had become a way of life for him. Every time he thought he was going to be forced to move, the circumstancial landscape changed, and he was able to stay. This went on for four years. Finally, (and I think it WAS a miracle) circumstances shifted and he now has a sure place of residence on Telegraph Hill. If you haven't read it yet, I highly recommend this awesome story.

Bandy has been a way of life for me. Our relationship may continue for a while, but the time may be nearing to say goodbye. If this is the pathway that is intended, my greatest hope could be that someone who loves geese will be the tender of this property. Also, we have kept our yard chemical-free, and a place where the geese and other wildlife can stay healthy and feel comfortable. It is my prayer that this may continue. I still haven't seen Bandy since September 15th, but his return could be around the corner. It will be hard to see him, and the reality of our move will set in when I do. Letting go is one of the hardest lessons we can learn in life. Change is inevitable. We appreciate your prayers for us and our friends.

When Jesse and I got married my mother-in-law moved to this property from a beautiful house in South Orleans, both to accommodate us, and to keep us nearby, as she was a widow with MS. Recently when I asked her if she missed the other house her reply was, "I never look back." There is much of life to be lived. There are new horizons. It is hard to say goodbye to a loved one. It is difficult to leave a way of life. But one has to believe that there is a Divine plan and many great things in store. When the transition comes, I purpose to remember Ginger's words and not to look back. Ginger is short for Virginia. Virginia is where we are headed. Yep. Unlike my non-migratory friends, we are going south. At this point, it is in God's hands. We'll keep ya'll posted.

We'll miss you and Bandy, Marcia! We'll keep you in our hearts and prayers!

Marcia is the author of BANDY: THE TRUE TALE OF A COURAGEOUS CANADA GOOSE.

You may visit Marcia and Bandy at www.bandythegoose.com