I live near Wolwerhampton in England and I don't know for sure that Barney is male but he seems very defensive and struts in front of his family and keeps a watchful eye. The goslings seem to be taking the Canada's markings but maybe there will be some black in their colour - we will see. I don't have names for the other geese like you do; Barney got his name from his breed.

The large pond that they live on is in a housing estate and it is very busy around there as it is next to the shops. The geese don't seem to mind, even though they sometimes get tormented by children. I do feel for them; they seem so vulnerable.

There are other breeds of birds on the pond, too. We have the odd Greylag Goose, lots of Coots and Moor Hens, Swans, Mallards, Tufted Ducks, Gulls and a regular visiting Heron.

This is the first year that Barney has mated, as far as I know. Before this, he was always on the edge of the group and he seemed quite happy at that, as long as he was part of it and he was protected. There must have been a "re-shuffle" and he got himself a mate and I suppose that means he has a higher status now. No longer will he have to waddle at the back of the gang. He even seems really proud. Last year, we saw no goslings for any geese and I suspect the council took or painted the eggs, and this year the count has been low. I know that the geese have their enemies so it is probably best for them that they don't seem to be taking over the pond or more drastic action could be taken. 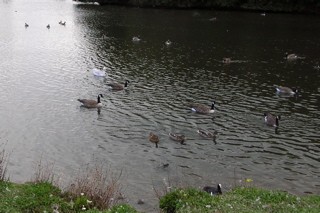 This picture shows a white goose that was adopted into one of the flocks. Just shows you how friendly they are. I saw them all fly in one afternoon, with this white domestic escapee. There must have been over a hundred and they had to make a couple of circuits around the pond so that they could all land comfortably. Then they gathered into their favourite groups. 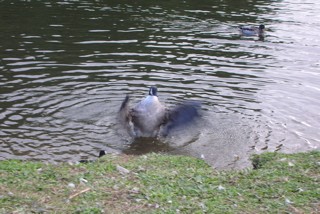 There was this lone goose having a really thorough wash, ducking, preening, and flapping. Just when I thought he must be finished he started all over again. You can just about see a Coot below, not phased in the least. 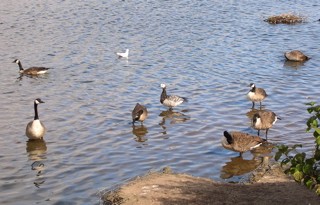 Finally, a Barney update. Here he is with his family nearby. Mom, I think, is front left and the babies are the two closest. The children are now bigger than Barney and I still wonder whether Barney is perhaps a Burnett. The name Burnett is a girls' name (Irish/ Scottish Celtic derived, I think) and I mention it as I sometimes think that due to his size, that perhaps he is female. All Barnacle Geese are smaller than Canada Geese and I wonder if a female Canada Goose would really be attracted to a small male bird. It is his attitude more than anything else that led me to believe he is male. In the photo, they have just finished washing. It seemed that every goose in the pond was washing at the same time. It must have been bath time. As luck would have it, the sun came out to dry them all.

Barney always seems happy and healthy, like most of the geese. Some, however, have battered wings, from flights, I think, but as long as they are around the pond they know they will get fed. I did hear a sad report of a dead Canada goose on the pond but I don't know the details. I don't know if it is the case here, but there have been reports from around the country of water birds being shot at with darts and pellet guns etc ...due mainly to children being bored during the holidays and venting their frustration out on wildlife. Unfortunately typical of some children today - no respect.

THANKS, CATHERINE, FOR SHARING YOUR STORY AND PHOTOS  WITH US!