We first heard about Brad when Carolina Waterfowl Rescue sent us the article below:
Goose found with nail through neck
05/06/2008 05:14 PM
By: Shawn Flynn

CHARLOTTE -- The Carolina Waterfowl Rescue organization has been trying to capture an injured goose in northeast Charlotte, as someone has shot it with a nail gun. That nail is now lodged in the animal’s neck.

The organization wishes to remove the nail, but has been having a hard time catching the wounded bird.

"It's pretty lucky,” said organization director Jennifer Gordon of the location of the injury. “Because it looks like it's wedged between its trachea and esophagus, which is between the airway and where he would eat. It's hard to tell because it looks like he's eating and he's drinking."

Volunteers spent Monday evening trying to catch the goose, doing everything from feeding him so he would come closer, to bothering his mate hoping he would come within range. They left Monday night having been unsuccessful in their attempts. Going home empty handed wasn’t what bothered them most about the evening.

“It was obviously intentional,” said Gordon about the injury. “It’s sort of discouraging because we’ve had a lot of animal cruelty cases in the past few weeks.”

Additional volunteers will attempt to capture the goose again on Sunday. 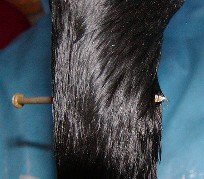 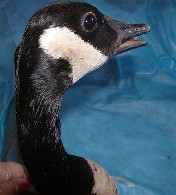 CHARLOTTE, N.C. -- When reports came in of a goose apparently shot with a nail gun, volunteers from Carolina Waterfowl Rescue began trying to find the wounded.

The goose lived with several others on a pond near a Retirement Community in North Charlotte. It took weeks to track him down. “He was probably defending his nest and they shot him with the nail gun to get him away," said Deanna Epps. "We made a couple of attempts to come out here and get him.”

When volunteers found him, the pictures they took told the story. A large nail protruded from the goose’s neck.

“Luckily it didn’t go into his windpipe. It kind of went between the esophagus and the windpipe and so he was fortunate in that way,” Epps said.

After removing the nail, Epps says volunteers started Brad on antibiotics. Ten days later, he was ready to go.

Brad is apparently glad to be home. When crews released him Monday morning, he immediately went toward his long lost mate.

Epps wasn’t surprised, saying, “They mate for life. They remember each other. When we carried the cage down there, he was honking because he saw his mate. And as soon as we opened it he ran straight toward her.”

The person responsible for Brad’s injury still has not come forward. For the volunteers at Carolina Waterfowl Rescue, they are just glad the animal survived.

The group rehabilitates and releases hundreds of injured birds, like Brad the goose, each year.

PLEASE CLICK HERE FOR A LOVELY VIDEO OF BRAD'S REUNION WITH HIS MATE.

CAROLINA WATERFOWL RESCUE HAS ALSO PROVIDED US WITH PHOTOS OF SOME OF THEIR RECENT RESCUES:

BEAUTIFUL EMBDEN MIX GOOSE ATTACKED BY DOG: BLIND GOSLING, CAUSE UNKNOWN
GOOSE SHOT WITH ARROW THROUGH ITS TUMMY (BEFORE AND AFTER PHOTOS) GOOSE SHOT WITH ARROW THROUGH ITS LEG (BEFORE AND AFTER PHOTOS) GOOSE WITH UVEITIS, CAUSE UNKNOWN. IT IS BLIND IN ONE EYE.
SOMEONE POURED HOT OIL OVER THIS POOR MOTHER MALLARD:   CANADA GEESE RELEASES RUSH HOUR IN POOL
Carolina Waterfowl Rescue goes above and beyond the call of duty to rescue, care for and save the lives of hundreds of ducks, geese and other birds each year. They are always in need of donations to help them continue with the wonderful work they do. Please visit their website for more information.