"Sydney Plum tells the story of caring for an injured goose in this beautifully written book. We highly recommend it." Love Canada Geese 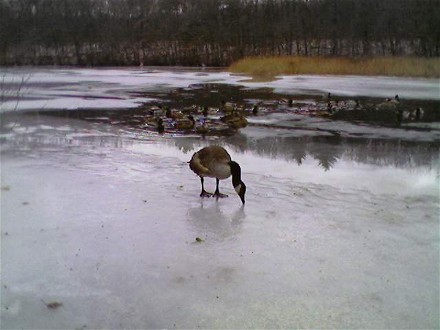 Alice
To all the wonderful people whose stories uplifted me on the "Love Canada Geese" website: I live on a river in Massachusetts. For two years I have rented a little house that is 3 yards from the bank of a river. There is a white duck that I named "Miss Duck." She lives on the river with two male companions whom I call "the boys." One is a huge fat mallard and the other is various shades of tan and brown. They don't fly. I feed them and so do the neighbors. 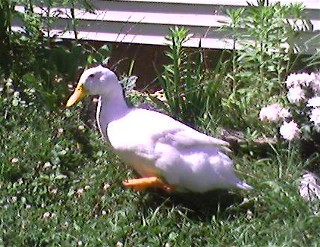 Early October I contacted a local woman who worked for Massachusetts Audubon. She informed me that a beaver dam was blocking the water. At this time, when the banks were exposed at least 25 feet I saw a Canada Goose upriver about three houses, walking on that exposed shore. I could see a couple of feathers hanging down on her right side. Her wing was hurt. I threw cracked corn toward her and she ate it.

The next day she was right outside my house in the water with Miss Duck and the 2 boys. She talks to me as she eats, and she lets me pet her side, and pull out the bad wing and look at it. It fits against her body with a triangle bone point covered with feathers. It is folded wrong against her. When I pull out the wing, the under feathers are gone and only big white barbs are there. During this time, she is here off and on, sometimes gone for 2 or more days.We also have a resident pair of Mute Swans who have lived here for years and overwinter like Miss Duck and the 2 boys. 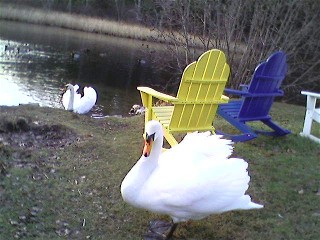 I was worried that the goose, whom I named Alice, would not survive the winter because of her bad wing and because the river will freeze solid. What if a predator got her? I considered bringing her in. I went online and found Mother Goose and Father's Goose's website. I spoke to Father Goose on the phone and ordered the goose diaper harness.

The first time I tried to pick her up her feet were dangling and she started screaming at the top of her lungs. I quickly put her down. I laughed for a few days every time I thought of it, as she seemed to be yelling in goose honk "Help! Help!" Father Goose told me to scoop her up like a baby with her legs up as they don't like their feet dangling.
November 18th, she came 6:30 a.m., following Miss Duck et al. up the edge of the lawn and she had frost on her back feathers. I panicked. I scooped her up and quickly brought her into the house. I placed Alice in my bathroom and there was a fair amount of goose droppings to clean up. I dreaded getting up in the morning and coming home from work thinking of what lay ahead of me when I entered. And I felt guilty leaving her in there. Meanwhile I was waiting for the goose diaper harness from Mother Goose. I'd sit on the toilet and talk to her and fill the tub with water. She would jump in and out of the tub. The first night I couldn't fall asleep because I imagined she would break a leg jumping in and out of the tub but that didn't happen. She would talk to me and occasionally honk when she did not like something, like when I put some corn in the tub water,  or laid newspapers down on the floor.
The second week we both discovered she liked showers. I was showering the tub to clean it out and she hopped in, stretched her neck, and opened and closed her bill, drinking the water. Next time I was in there, she stretched her neck made the open/close bill motions toward the shower head. "Put the shower on," she motioned. My son and my former husband both told me to let her go. "It's not fair for her
to be indoors. She is a wild bird. She'll survive or at least die in her own environment." I wrestled with this for two weeks. Finally at the end of two weeks, the goose diaper harness arrived. Of course, Alice hated it. She wriggled and struggled. I looked at her and wondered if I was doing the right thing for her and for me. I realized this was going to be a long process. First, she had to get used to the harness. Second, I couldn't go away overnight anywhere because I had to be home to change the diaper. Third, I lived with 4 indoor cats and that was going to take many days of adjustment for her and them.
The next morning I let her out and guided her to the bank. She walked on the ice and entered the melted water where about fifteen wild Mallard ducks were swimming. She dipped her head, and then her head and neck in the water throwing it over her back and did a long shake of her wings, stretching them out, then dunking again. She went as far away from me as she could, getting out of the pool of water onto the ice and walking on the ice to sit across the river maybe five kayak lengths in front of an island of tall reeds. Later, she walked down beside them toward the lake. I was in and out of the house, sitting, watching her, talking to her the whole day. I cried, of course, off and on all day, wondering if I had done the right thing.
When I took her in, I did not know about Bandy down at Cape Cod who survived winters with one leg or the other wonderful stories on Choo Choo's website. That day, I thought, "Water is her home, not the land." She is perfectly comfortable in the water, on top of the ice, in the reeds. It's me who doesn't know how to live in the water, or how to overwinter with ice and snow. If Bandy could survive, my goose could, too.
Alice vanished for a week after I released her.
Wednesday, December 5th, 2007
I was sitting on the couch about 1:30 p.m. and I thought I hear a goose honking. I hurried outside. There in the front, on the lawn was a goose. I was thrilled, and thought, "Is that Alice?" I hurried to get the dog bowl and some corn but when I went to the front, the goose was flying away. Not Alice. I walked along the shore in the direction the goose flew. Miss Duck had been absent for the last days too and I didn't know where she had gone to. Today I stopped upriver at her old winter stomping ground, and she and the 2 boys were not there.
So I walked along the shore and east to the road and looked over toward the water on the other side. There in the middle of a cove where the lake has fingers of land was broken ice and water, and there were water birds there and of course, Miss Duck and the others. Alice was there and so was another goose, probably the one who had come to my house and stood on the lawn and honked.

What do you think of that? I feel like my goose sent that goose over. Why did that goose visit my house? I live in a neighborhood where there are lots of houses close together. How come that goose was on my lawn instead of theirs?
Miss Duck answered my whistles and calls and she came to me with the twoboys. They were far offshore. Alice started to walk, but only a few feet, then she sat on the ice. The other goose stayed put.
Two hours later, both geese were no longer with the 3 ducks.
Isn't that spooky, the stranger goose that led me to Alice?