A touching story about a lady and her beloved goose!

"One of the most beautiful books ever written about Canada geese!"
Love Canada Geese

My first close encounter with Canada Geese was 2008 at our Duck Pond at Lougheed Village, Burnaby, BC where my husband Al and I live.  I am a novice photographer and was taking pictures around our duck pond every day and enjoying it as it’s so beautiful here.   We are new residents to BC and just love that everything is so green.

There’s a small island in the middle of the duck pond and I noticed one day a Canada goose sitting under a tree, which I later realized was her nesting place.  This was April 29th 2008 and soon after, I saw mum and dad swimming in the pond with their 7 goslings and realized I was witnessing a new family.  I immediately fell in love with them.  I followed them all around the grounds daily (and sometimes 3 times a day) and kept taking pictures to document the changes the goslings go thru as they grow up.  I had seen Canada Geese before but not up close and personal. 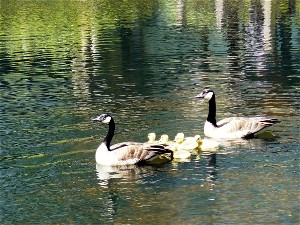 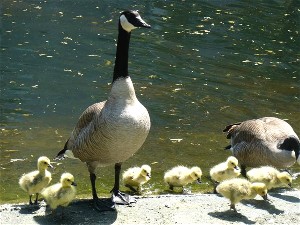 The goslings were just little balls of yellow fluff at first and followed mum and dad so closely.  It opened up my eyes to just how wonderful mum and dad geese are as parents.  They never let them out of their sight and know how to discipline them so as they stay close to mum and dad at all times.

A few days later I noticed the mum and dad and babies taking a walk around the duck pond on the sidewalk and I counted 12 goslings.  I thought I was seeing things and then found out that a second family of 5 goslings was born on the roof of one of our apartment buildings.  They had been moved to the duck pond so as not to fall off the building.  It appeared that their parents got scared off and their 5 goslings immediately became part of the first family.  And then there were 12.   I wasn’t aware that this goes on quite a lot with geese.

Not long after, I noticed that there were two adult geese that kept coming to the pond trying to get close to the goslings.  It appeared to me that they could be the parents of the goslings that were removed from the roof top.  The newly adopted parents would not let them anywhere near the goslings.  It was rather sad to watch.  They would try to get close to their babies and would be chased away by the other parents.  I got some really good pictures, one in particular that showed to me just how sad they looked. It looked like they were staring into space hoping to get a glimpse of their babies.  I wanted to do something, but realized that I could do nothing to help. 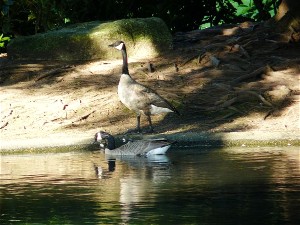 Two lonely Geese looking for their babies May 27, 2008

I took a picture one rainy afternoon of the mother lying on the grass with her whole body all fluffed out around her.  I wondered where the babies were and then found out that they were all under mum’s wings. They were all nice and dry.  It didn’t take very long before they were getting too big to fit under her wings, with their heads popping up thru her feathers. 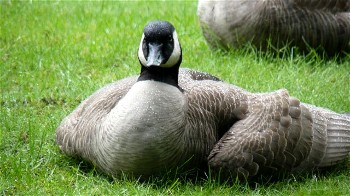 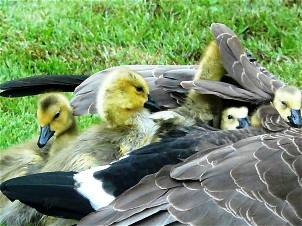 I felt like I was taking pictures of our grandchildren and couldn’t take enough to satisfy me.  It wasn’t long before all of the goslings would come running up to you looking for food.  They would take the food right out of your hands while mum and dad watched with a good eye.  At first when mum or dad would hiss at us we thought they were warning us to stay away or move over, but later realized they were asking for more food.  I think they were getting used to us and knew we would not hurt them. 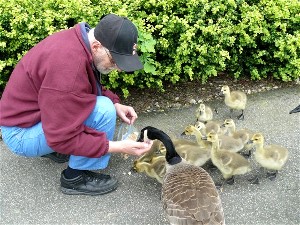 The goslings acted just like kids, playing in mud puddles and it was so much fun watching them.  Sometimes they seemed to be gazing out into the water and wondering what was waiting for them when they grew up. 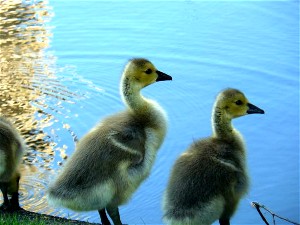 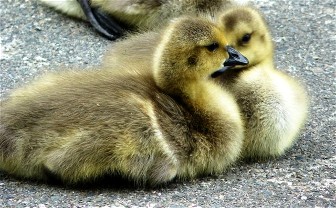 One time they were all lined up along side of the pond with mum and looked like they were all going to jump in together with one of the goslings giving instructions. 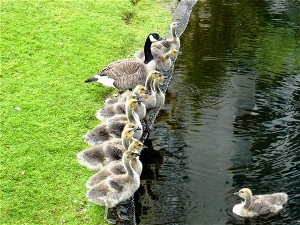 After a long day of foraging for food the goslings would stretch out on the grass with their long legs dangling out behind them.  I guess they were growing so fast that they weren’t used to such long legs.  They looked like they had had too much to drink or just too pooped to pop. 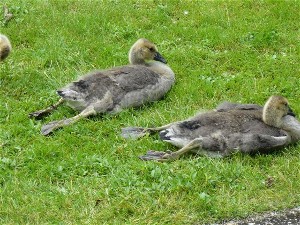 I often wondered how mum and dad kept track of all 12 goslings; did they count them to make sure they hadn’t lost one of them on their walks?  I continually counted them every time I saw them, as the baby ducks at our pond disappeared rather quickly due to unwanted predators.

Watching the goslings grow up was like watching a butterfly emerge from its cocoon. They started to get feathers and all of their fluff starting disappearing.  It was happening so quickly that I didn’t want to miss anything.  Gradually their feathers started to come in and they got tail feathers and their color changed. 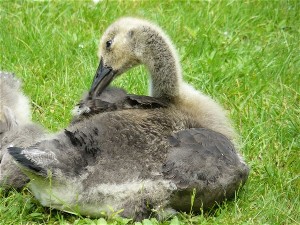 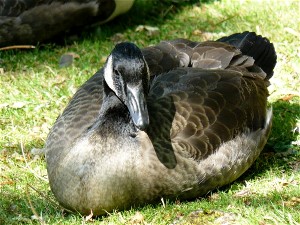 I wanted to take pictures of them learning how to fly. Our pond is not very large and it was a challenge for them to be able to fly out of the pond. The pond is just below our balcony so I could hear them when they were testing their wings in the water. The day they finally left the pond, I missed it, as I thought it was some visiting geese that were flying. It turned out to be the goslings. 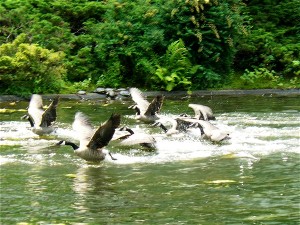 I really miss them not being here, but have found out that they sometimes return to their nesting place and hope they might come back for a visit before the summer is out. At least, I have all of my pictures to remind me of such wonderful creatures that God has given us. There's always next year and a new family may once again come our way.

On July 31, 2008 we were so excited as all 14 of our Canada Geese family returned to their birth home.  The only way I was sure that it was them was because all 14 of them stayed together when they were swimming in the pond.  There were other visitors that came in at the same time, so I was out there counting out the 14 to make sure it was really them.  The island right behind them in this picture below was the location where they were born. 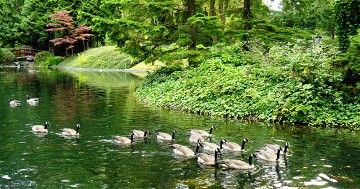 Thanks be to God for my Close and Personal Encounter. I love you Molly. 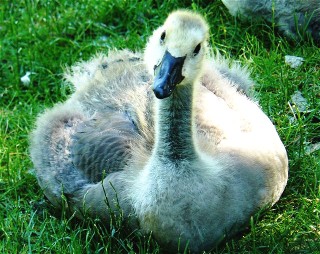