You'll be sure to treasure this lovable book for ages!

A story that will surely touch your heart. 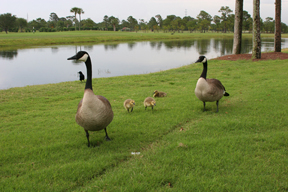 Gabbie and Gwena and their babies, 2005

I live on a golf course in Tampa Bay, Florida and I've had a family of Canada Geese visiting me for the last five years. They found my bird feeders.  I started feeding them and they frequent my yard periodically for a meal and mostly to "talk" to me.  They have not ever migrated north because our weather is apparently tolerable year round and they really have it made here.  We have a large pond on every hole of 2 - 18 hole courses.

One day in July (2006), they were acting strangely, not coming by, so I went out to look for them on the golf course.  When I found them I realized that Gabbie had a broken wing that was dragging on the ground!  The injury had to be quite recent as I hadn't noticed it before.

I contacted the Sea Bird sanctuary and they came to capture him. It took about 5 of us with one person who was experienced in catching large birds. She had a very large net on the end of a long stick. After about an hour, we finally cornered Gabbie in the shrubs and were able to get a net over him. The experienced person then got a hold of his shoulders and put him in the cage. That was a bit of a struggle!

Gabbie is doing quite well, walking around in the hospital with his wing taped up. I'm sure he's not very afraid of the people there as he has interacted with me and many others for several years. Some people here in Florida are very wary about the potential numbers of Canada Geese that we could get, but most people really adore them.

Gabbie is the father of 5 babies from a nest this Spring. He arrived here, as an adult, about two or three years ago. He was an outcast for about a year and I felt so sorry for him. He was alone and bullied by the leader Uly (Ullyses), but he still hung around and put up with Uly. About a year later, he mated with Gwena (Gwenaviere) after her mate Uly (Ullyses) died. No wonder Uly didn't like him! Anyway, Gwena and Gabbie had one successful nest, then Gwena died, and now Gabbie's had a new mate for this past Spring from which they had 5 babies who are doing well (except for one who's very small and limping. I think I might ask at the hospital about what to do about her-I would expect they'd tell me to do nothing because I can't catch her since she can fly).

Anyway, I don't know how the geese have died, they just disappeared and I assume they died. Anyway, the geese stay here year round! Our weather rarely hits freezing temperatures, and if it does, it's only for a few hours in the middle of the night. Our worst weather is July and August, where it routinely gets to 94 degrees, but the other months are really nice. We have huge ponds on every hole of two golf courses and the geese love it. I think the only problem is an occasional alligator that can be seen in a pond. The ducks and geese seem to know when there's an alligator around-they stay out of the pond and go to another one. 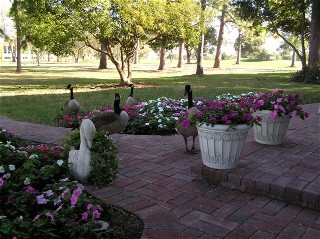 Uly, Gwena and the babies

Geese are therapeutic--my son, our only child, is leaving for college in about a month, (he's going out of state to Nashville, Tennessee--Vanderbilt) and the geese have really been comforting to me this summer. They warm my heart just by their presence in my yard--they often sit outside my window and keep me company when I'm working on my website. They do like my food, but it's much more than that. They love it when I talk to them, and they can see me sitting at my desk through the window. They have formed a special bond with me, even though they are wild. 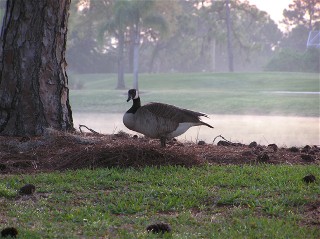 Gwena, the day before she laid her eggs 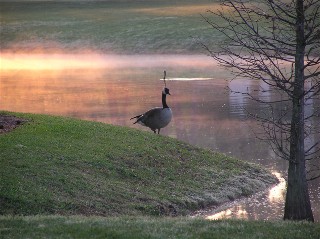 Uly, Gwena's devoted mate. He was committed to patrolling the area around her nest.

Sea Bird Sanctuary untaped Gabbie's wing again and he still didn't hold his wing in the right position. They said they're going to give him one more week and try again, but if the wing still drops, they'll start looking for a home for him.

We discussed my yard on the golf course and it's not a safe or appropriate home for him so they won't give him back to me. I need my own fenced in pond. How many people have that!? They did say the SPCA can help them locate a home for him.

I'm looking at Gabbie's family right now. They came over to my yard for their breakfast, a quick conversation with me, a little nap, and they'll be off until they feel the whim to return. It may be lunch time or it may not be until tomorrow morning. They seem to be just fine without Gabbie as there are five of them and Gabrielle, their mother is with them as well. Maggie and Lucca have become part of their family too which warms my heart. Really all is well with Gabbie's family, I just feel very sorry for Gabbie. What a wonderful feeling it must be to fly and how horrible it would be to lose that ability.

I happened to speak with the veterinarian who cares for our dog--a great guy--he is a bird lover and volunteers at the Sea Bird Sanctuary. He said he'd give them a call and see if they could operate on Gabbie and fix the problem.

Gabbie is back with his family now and doing very well!

Sadly, The Sea Bird Sanctuary says he will never fly again. His wing tends to droop slightly, but not as badly as it was before the Sea Bird Sanctuary worked with it. He's able to spread both wings and tries to fly but never gets off the ground. I do hope he defies their prediction and eventually regains his flying ability, but he really does seem to be okay as he is now.

The Sea Bird Sanctuary decided it would be fairly safe for him here since he has such a large family who seem to care about him and stay with him (usually). They most often walk around the golf course together, still frequenting our yard for snacks and a nap. We're surprised to see how far they walk in a short period of time.

Hopefully they will be able to gang up on any predator that Gabbie can't get away from. Have you ever been attacked by a Canadian goose? I have--several times (going too close to the nest of a nervous, male expectant parent) --it's pretty dangerous as well as scary! So I hope the group of them can intimidate almost any animal.

I took lots of pictures of Gabbie's reunion with his family as well as recent pictures of him lounging in our yard. I'll send them to you when I get a chance. The most interesting part of the reunion was the noise his mate made when she realized it was Gabbie! I wish I had a video with the sound of the reunion--it was heart warming!

Nina  is a family nurse practitioner and her husband is a physician. They designed a health related website two years ago: http://www.bami.us  BAMI stands for Bay Area Medical Information. BAMI is a health care resource for both health care professionals and consumers. The goal is to help meet an overwhelming need for simple access to both health care resources and reliable health information. It started out as a resource for their patients but their traffic now extends around the world. They would love for you to visit their website.