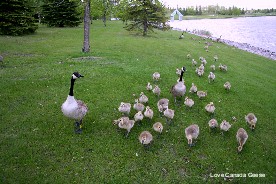 Why do some Canada goose parents have 50 goslings?

When we first became interested in Canada geese, we wondered about that, too. We saw parents with fifteen or more goslings. Once, we lost count when we got to about fifty!

Canada geese parents bring their goslings together in flocks known as "creches" and the goslings are communally looked after by all the adults. It's like a big kindergarten with the adults sharing the babysitting duties. They do this because the goslings will be safer; there will be more adults looking out for danger for the entire flock.

In Ducks, Geese, and Swans of North America, Sherwood (1965) reported that mixing of broods (known as brood amalgamation) occurred because at first, neither the parents nor the goslings could recognize each other.  When the young were 2-3 weeks old, the parents could recognize them and brood mixing halted. According to Sherwood, goslings were unable to recognize their parents or broodmates before they were 5-6 weeks of age.

We have been observing geese closely for the last three years. We don't agree with Sherwood's theory that parents are unable to recognize their goslings until they're 2-3 weeks old.  Here's how we arrived at this conclusion:

The Chesters' 7 goslings were hatched May 15, 2005. On June 9 (see photo below), they had four goslings and all four goslings were 24 days old (I can tell by their overall size and appearance, compared to other goslings). They lost 3 goslings either to gang brood merge or accident/ predation. Chester Sr. is a gentle gander. I've never seen him fight with another goose or gander and that might explain how The Chesters lost 3 goslings (e.g. perhaps an agressive couple stole their 3 goslings) 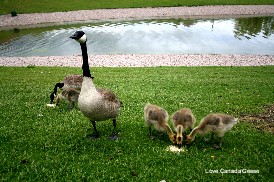 The Franks have become Power Parents to 15 goslings (June 9, 2005) but within their gang brood are their original three goslings who were born May 9. The number of goslings in their gang vary from day to day but the 3 oldest goslings are always in the group. Occasionally, we see The Franks with just their 3 goslings, which leads us to the conclusion that they're extremely patient parents who don't mind babysitting other goslings most of the time. 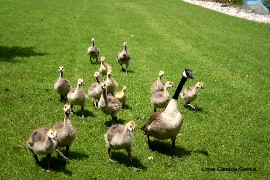 (Mrs. Frank leads her gang June 9, 2005. You can see that her goslings are in the group. They're exactly 1 month old. They're gray with sprouting wing feathers and they run alongside her)

The same goes for The 86Ps who are Power Parents to about 11 goslings. Their 5 goslings hatched May 11 and they mingle with the other goslings in the gang brood, no matter how large or small the group. They look like month-old goslings - feathers have sprouted on their wings and they have turned gray. 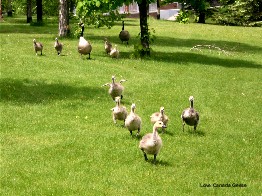 (The 86Ps gang June 9, 2005. Their 5 biological goslings are almost a month old. They're running alongside 86P. You can see that one gosling is older than the rest. He's on the right side and gray in color. He is from another parent.)

Gang brood mixing can happen in several ways. When Canada geese parents get together and goslings mingle, the goslings may trot or swim away with the goslings of another family, which shows that Sherwood is probably correct about goslings not recognizing their parents until they are older. Some parents are incredibly agressive and will steal goslings from other parents. It has been documented that non-breeding couples sometimes steal goslings from less agressive parents.

Some Canada geese parents welcome other goslings into their family because a larger family is a more dominating family in the world of Canada geese. However, other parents prefer to have smaller families.

It has been observed that gang broods can exceed 100 or more goslings, with more than a pair of adults supervising the flock.