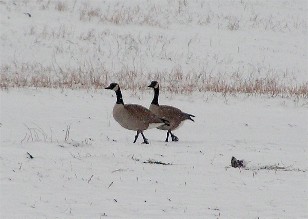 Seven years ago, I 'rescued' two Canada goose eggs from a nest in our pasture. A pair of geese were working on their second cluster due to foxes stealing all the rest. I could hear the goose/fox fights at night.

So when there were only two eggs left in their last nesting attempt, I took them and put them under two of my Chinese Silkie hens that were broody. They hunkered down over the huge eggs. The incubation temperature for geese a little higher and they sit on them for nearly 30 days rather than 20 (like chickens) ...so I wasn't sure it would work but I knew the eggs would be fox fodder so I tried it, knowing Silkies are the best setters and mothers in the chicken world. The babies hatched out within 24 hours of each other. Each Silkie hen was as proud as she could be of her huge baby. It was so fun to watch them. Soon the goslings were much taller than their mothers and as tame as the rest of my poultry. Both goslings would sit in my lap.

When the young geese were learning to fly they used the driveway as a runway. I'd laugh till my sides hurt when their Mama would go running after them frantic!!! Geese taking off and banty hens hopping and screeching. Geese make a lot of racket when they play 'taking off' and the hens took that as an alarm and would go into Mad Mother mode! Other hens give up mothering in about 6 weeks ....while Silkies go the distance and give up only after their babies leave them.

As Fall approached, I wondered if the geese would leave. They were flying and started to visit their parents across the highway at the pond. Whenever they would fly and go visiting parts unknown ...they'd come home at days end and into the chicken house at night. They would also do 'Blue Angel' fly-overs and honk as they did so. It was so much fun raising them. Then, deep in November ...they left with their parents. 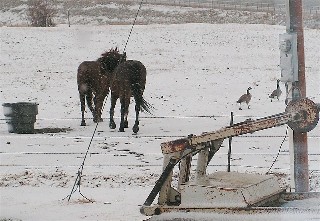 That next Spring ...the gander showed up about 40 yards from the house and walked in as he always had. He stayed for a week ...I'd put corn out for him. The second year ...he had a mate. This is now Year 7 ..and they came back last week.

This morning (April 2, 2007), they were 20 feet from the house laying down, out of the wind. They'll leave soon and go to where they nest ...but this is always the point to which they return first. The gander is no longer tame...but that's ok ...he still looks for his corn. His mate is a good sport about coming so close to the house and she was reluctant at first. I think he told her, "I know it ain't much to look at but this is home."